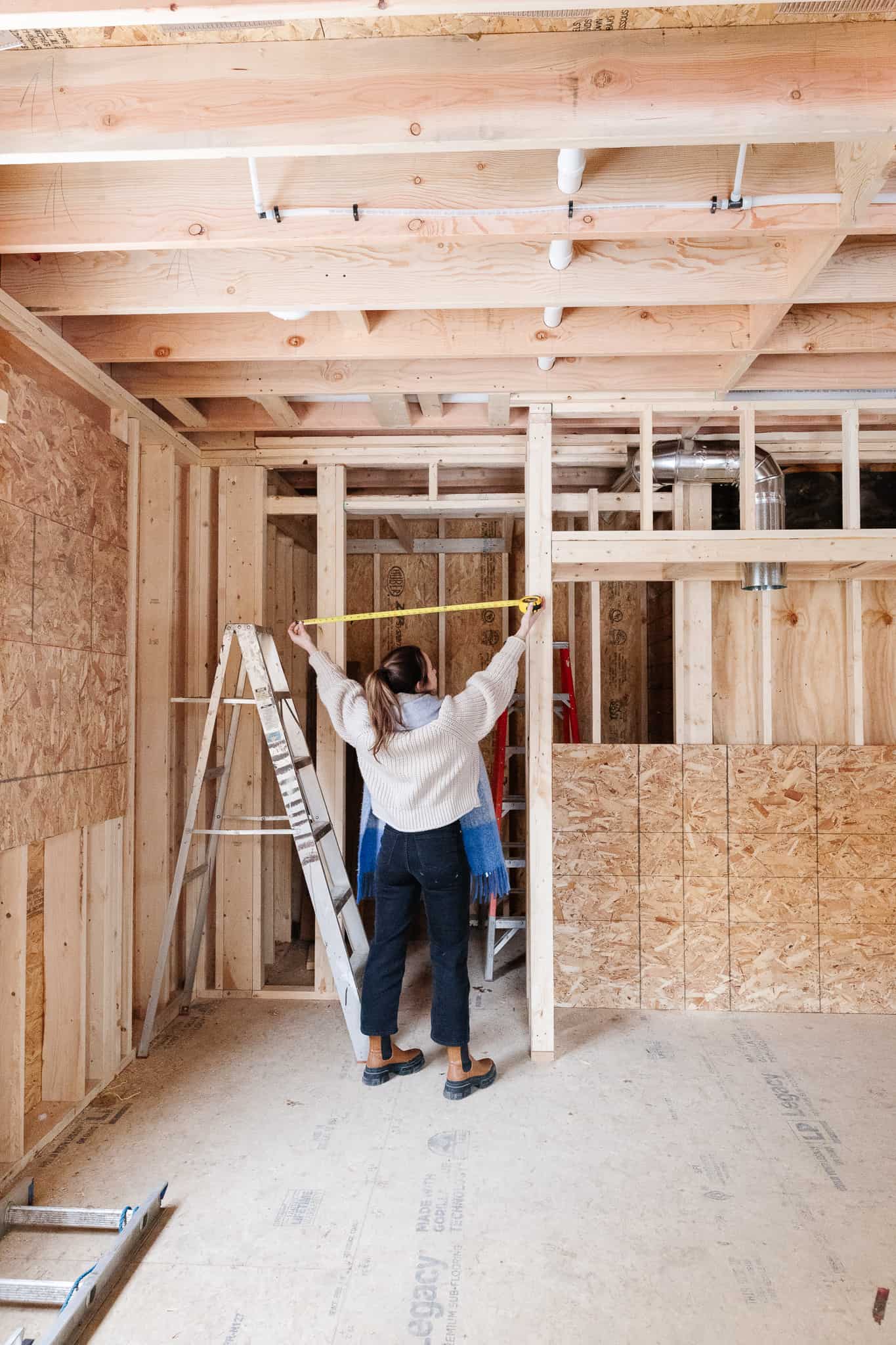 One of my goals for the new year is being better about documenting everything happening at the GBOGH flip home. Not only do I selfishly want these to look back at for memory sake, but I know a lot of you are loving following along!

If you want a quick overview on the work we're doing at this project, you can click here and read alllll about it.

Construction officially started on October 18th and the crews have been chugging along. This is a HUGE project so the last two months have been really about getting the foundation of it in place so that the fun stuff can start happening in a few weeks. We have been patiently waiting for windows to arrive (they were scheduled for December 27th, but like everything else are pushed back😭). Because it's so dang cold in Wisconsin, we really need those to come ASAP. Otherwise, nothing else can really happen (like drywall, flooring, cabinet install, etc).

We're putting over $500,000 into this house...yes, you read that right. Ouch! The house is in a really, really nice area so we will recoup the expenses but boy, when I tell you everything has gone over budget, everything.has.gone.over.budget. The fun side of all the money we're putting into the project is that there is SO much that is happening that it gives us a lot of content to go over!!

Here's what has happened so far with construction... 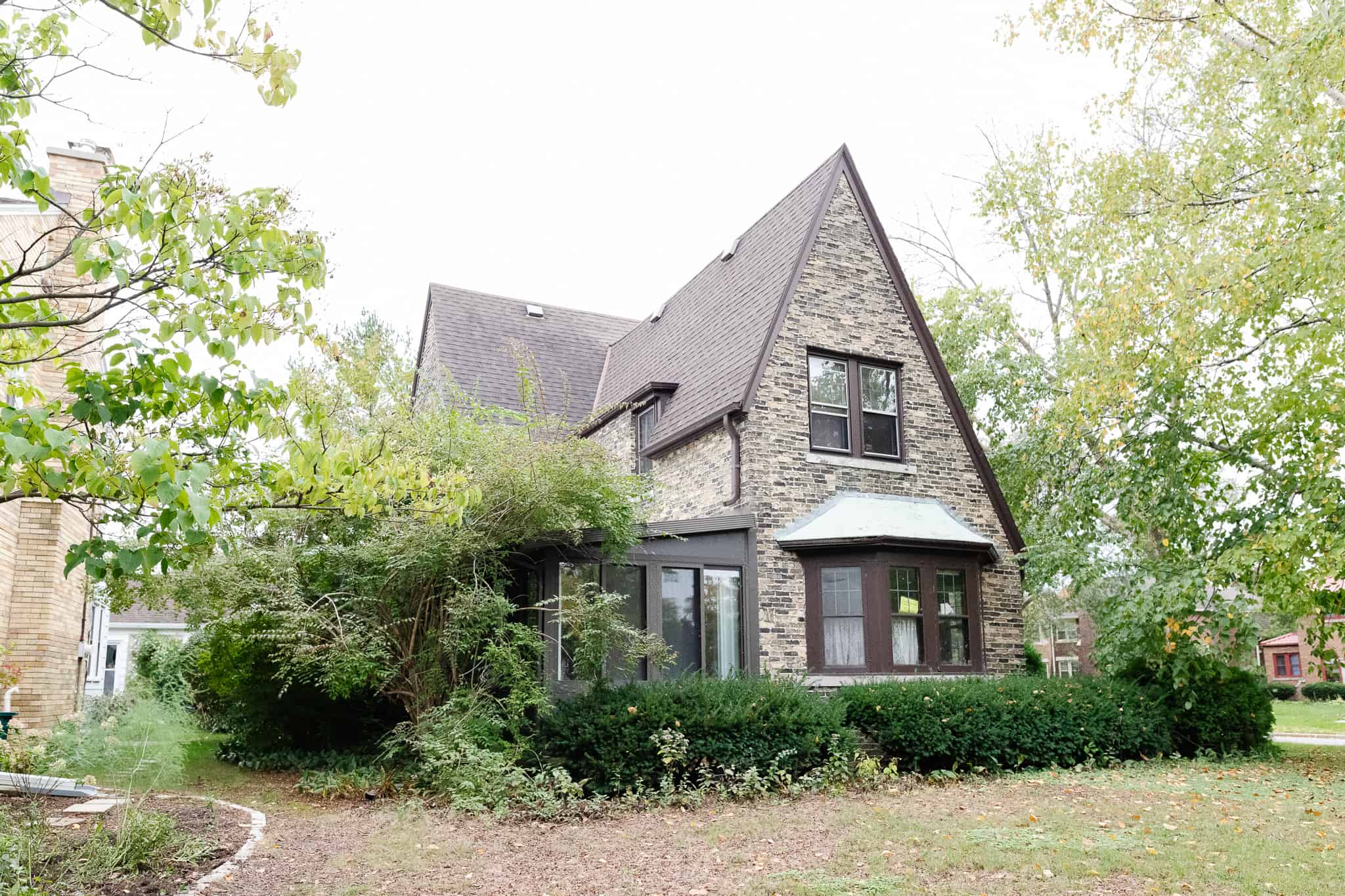 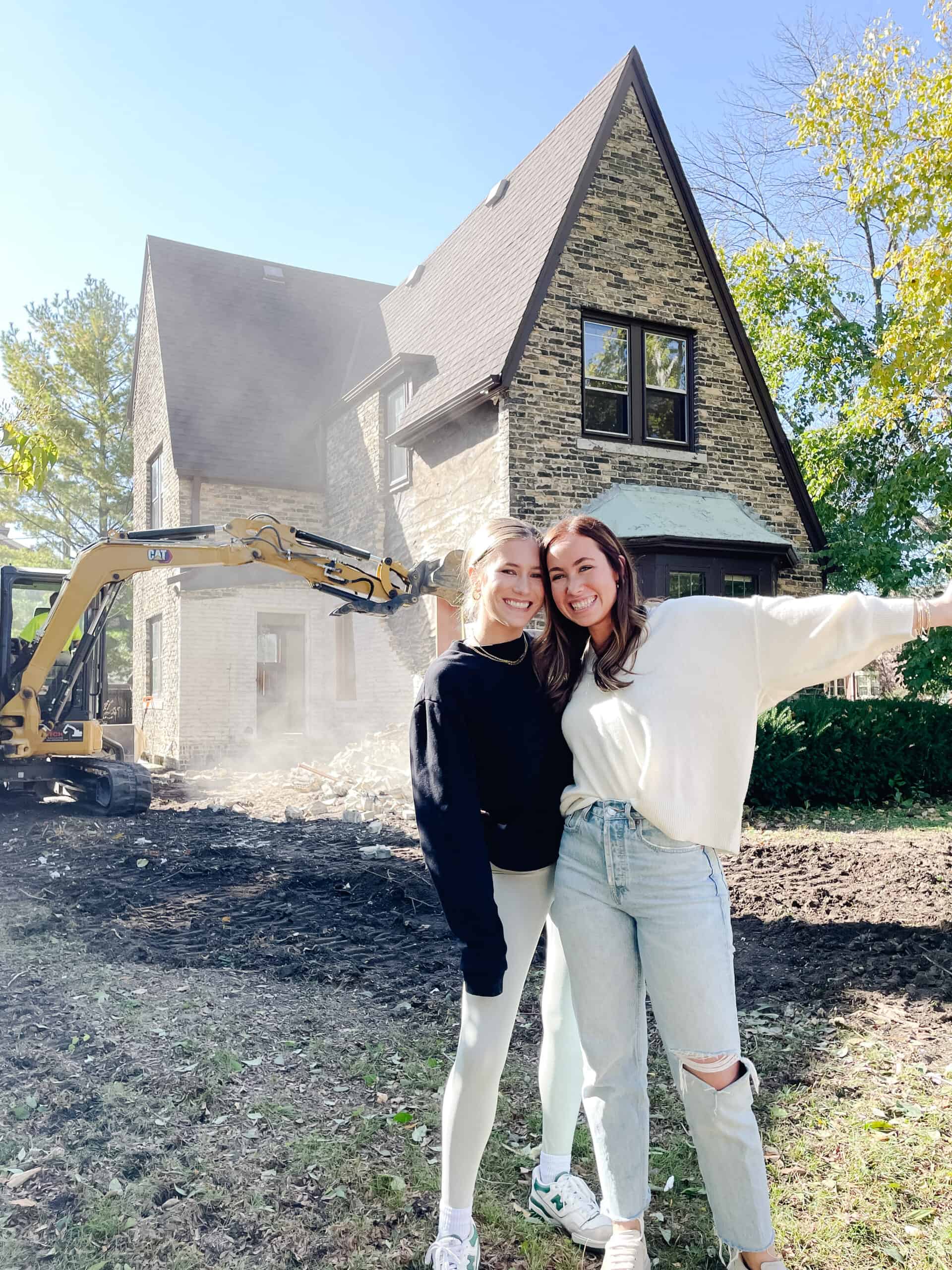 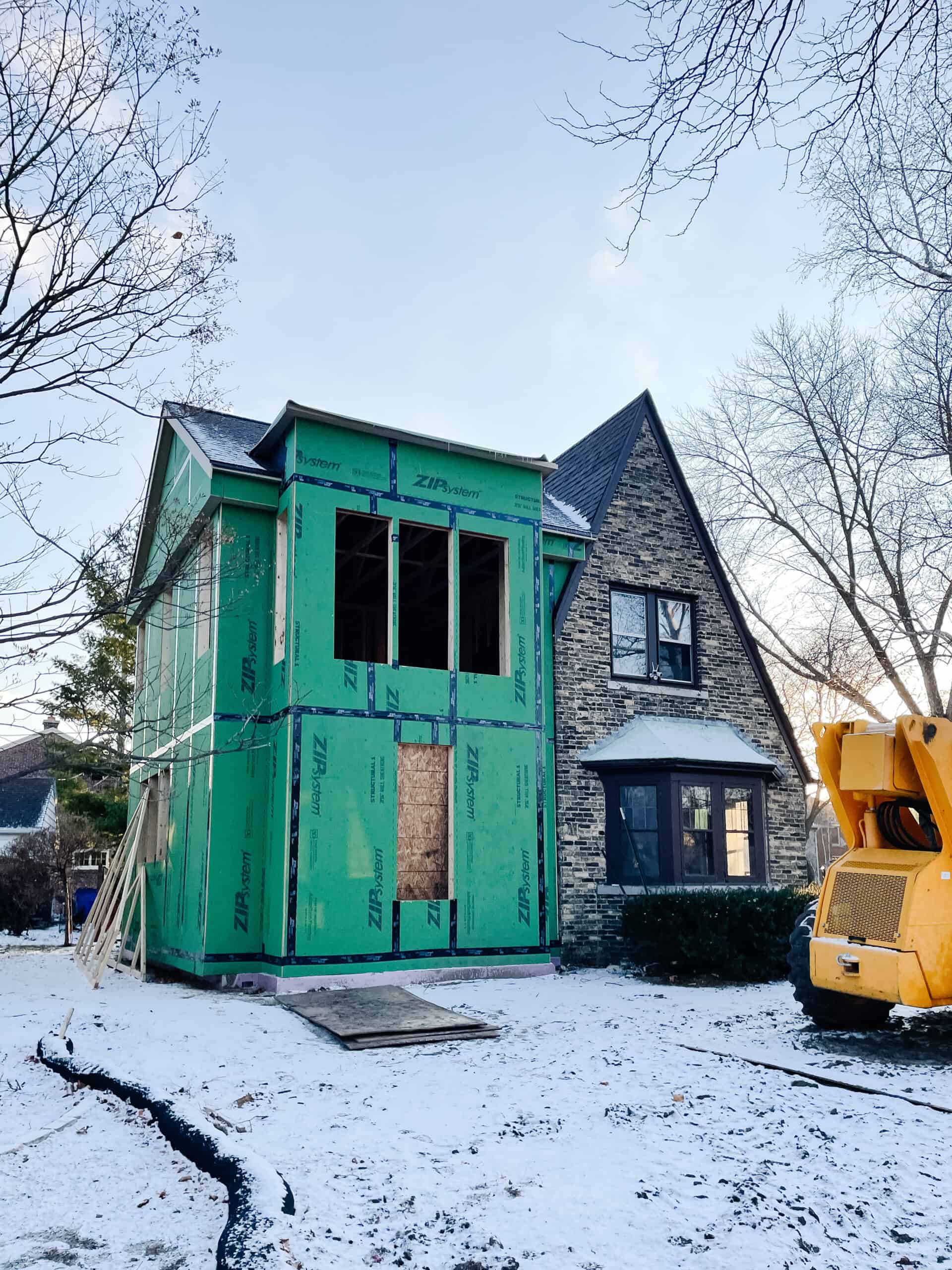 The two story addition is well under way! The crew worked hard and fast to try to get as much as possible done before the snow really piled on.

The first floor will mimic the 3 windows that you see on the second floor. I loooveee how the addition looks in relation to the existing home. We are basically doubling the size of the house and I worked super hard (with Joan the architect) to make sure that it flowed together really well. It obviously is a new part to the home, but I don't want you to look at it and think "wow, that looks out of place". It looks like it was always suppose to be there!!

As a reminder, here's what the house will look like when it's completed: 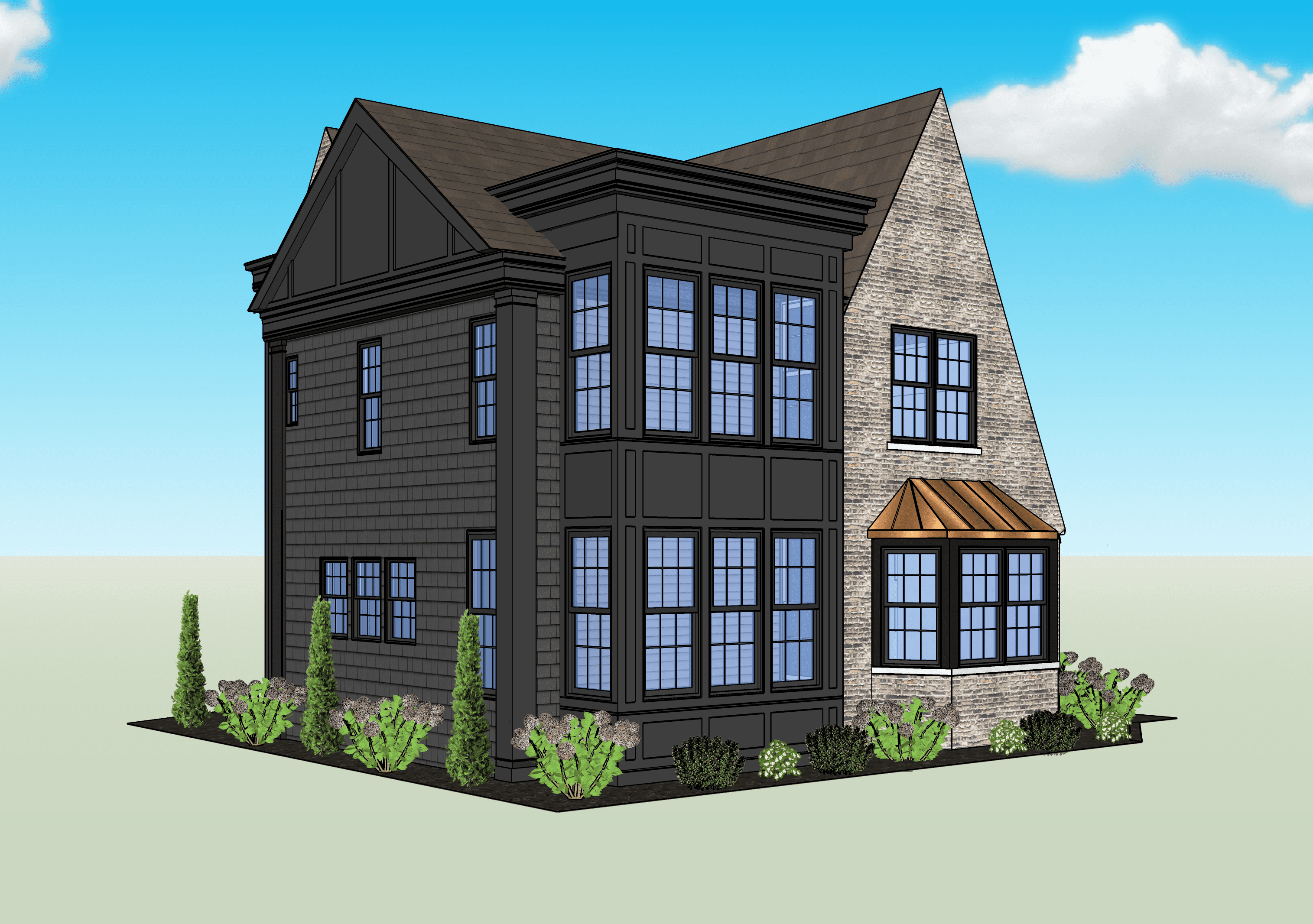 The next steps for the outside are obvi the windows, but also the cedar shake and once it gets warm enough, eventually the paint! Praying for a warm winter so the paint can go on sooner than later...👏🏼.

The inside of the house is WILD! It is basically down to the studs. It's really incredible to see how well old homes are built. I was scared 💩-less of what we were going to find in this home after we opened the walls up and we have been so lucky (at least in my opinion haha). There have been a few things here and there that need to be fixed but overall...this house was extremely well built. 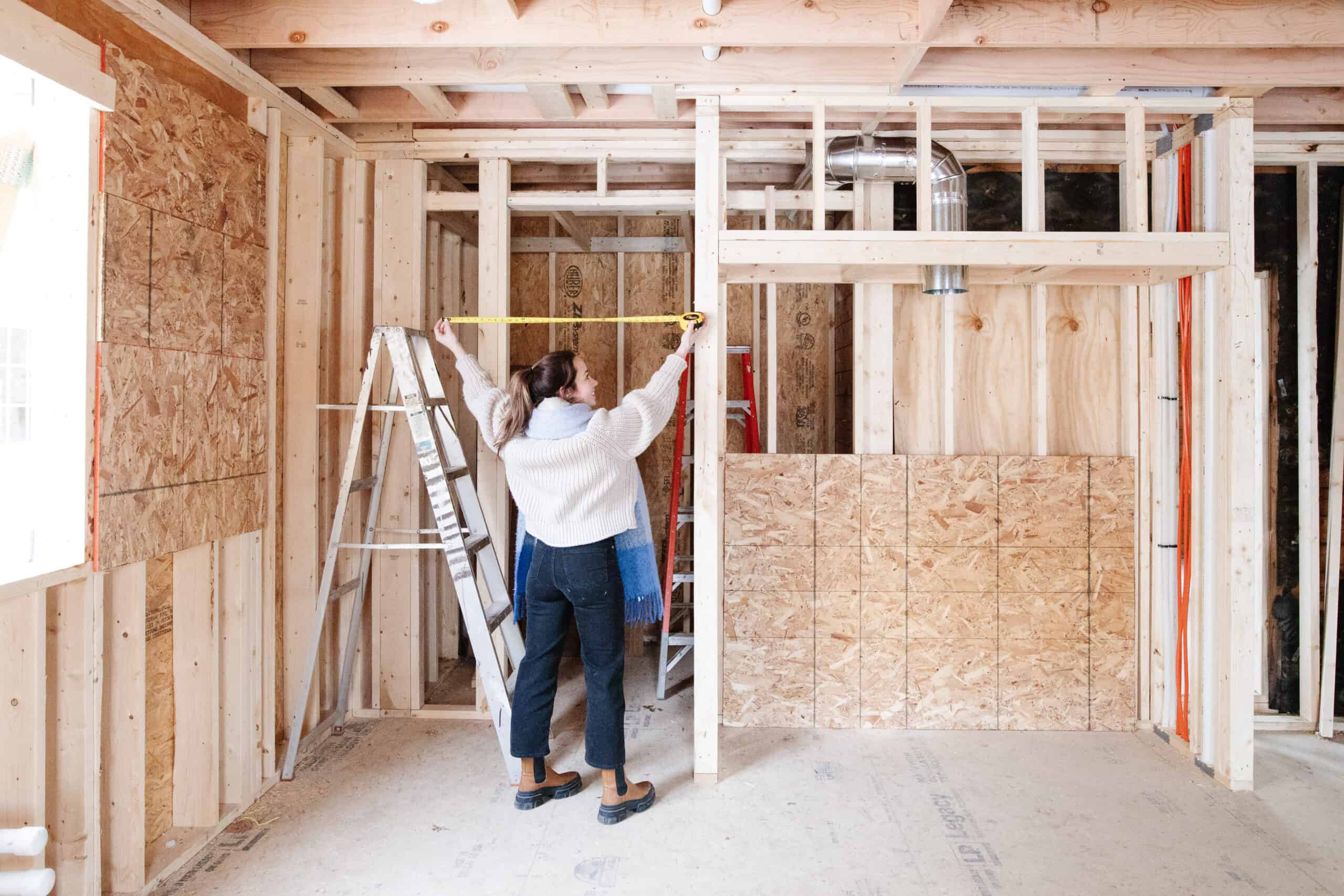 I am standing in the addition and future kitchen in this photo! We ended up switching some things up from the original plans and instead of having a large closet in the 5th bedroom, there is now a butlers pantry!! We figured for future buyers this would be pretty dang exciting :). The 5th bedroom is on the main floor so we are figuring it will probably be used as an office instead of a bedroom, so the butlers pantry is a lot more of a functional plan.

I am working with the cabinet maker so that the door to the pantry is actually through a cabinet. That way, when you look at this wall, it will just look like a wall of cabinets! The opening to the right of where I am standing is where the range is going to go. It's going to be completely covered in tile! This is one of the things I am most excited about in the home. 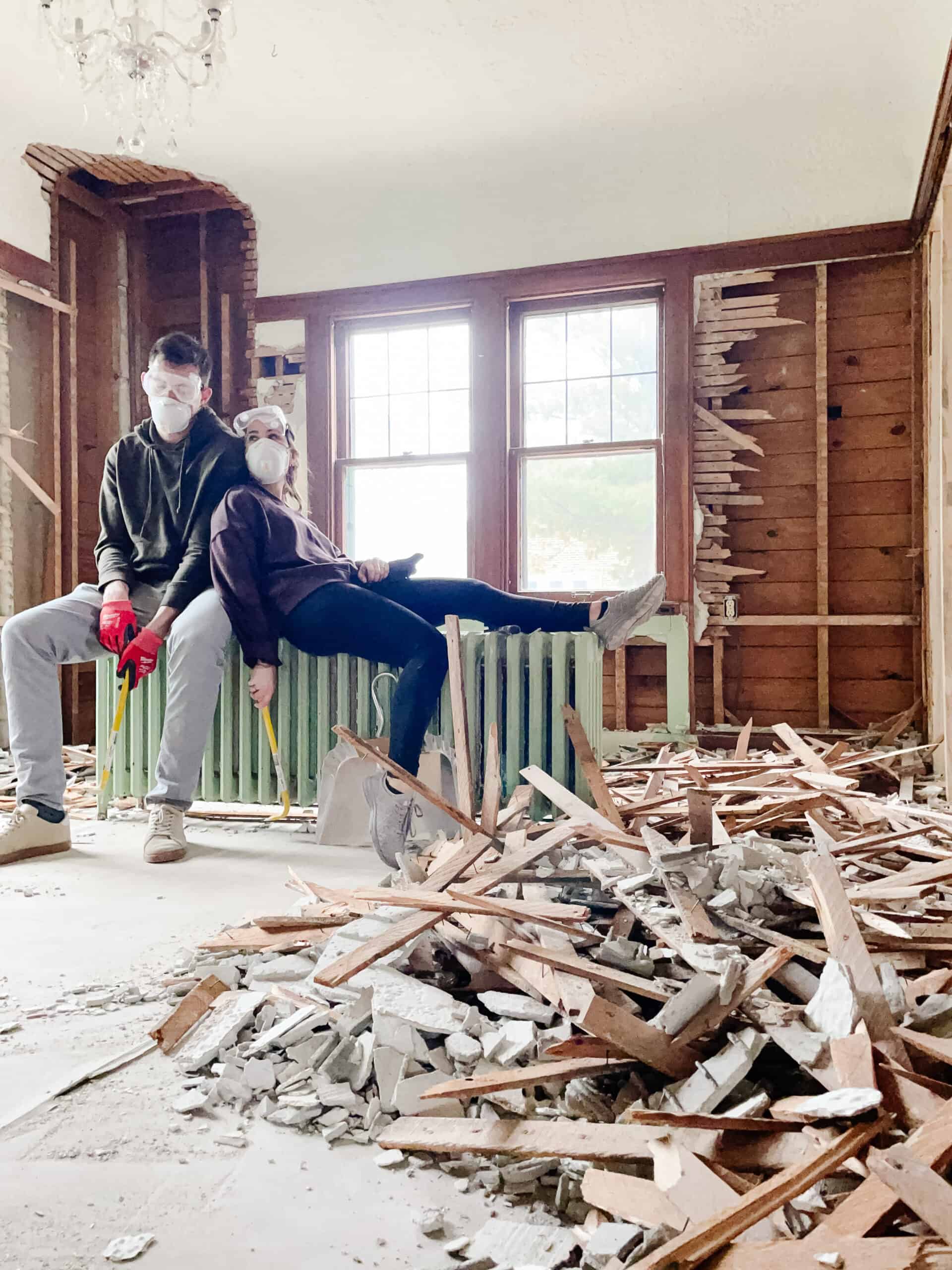 Ben and my big task over winter break was doing the demo in the dining room. We're trying to keep the curved ceiling at the top but the rest of the plaster needed to go bye-bye. Let me tell ya, demo is no joke!! I couldn't lift my wrists after hahaha. 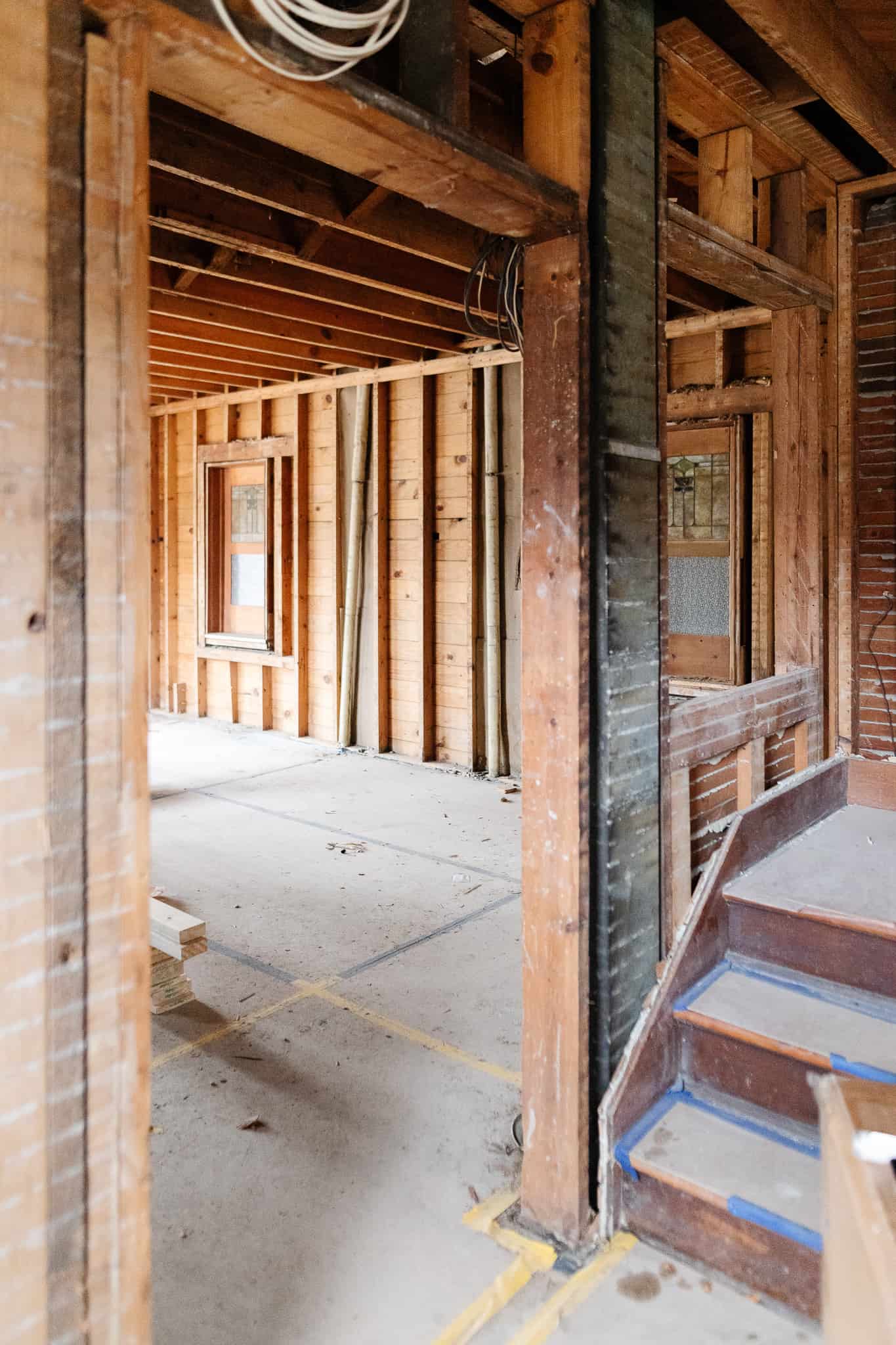 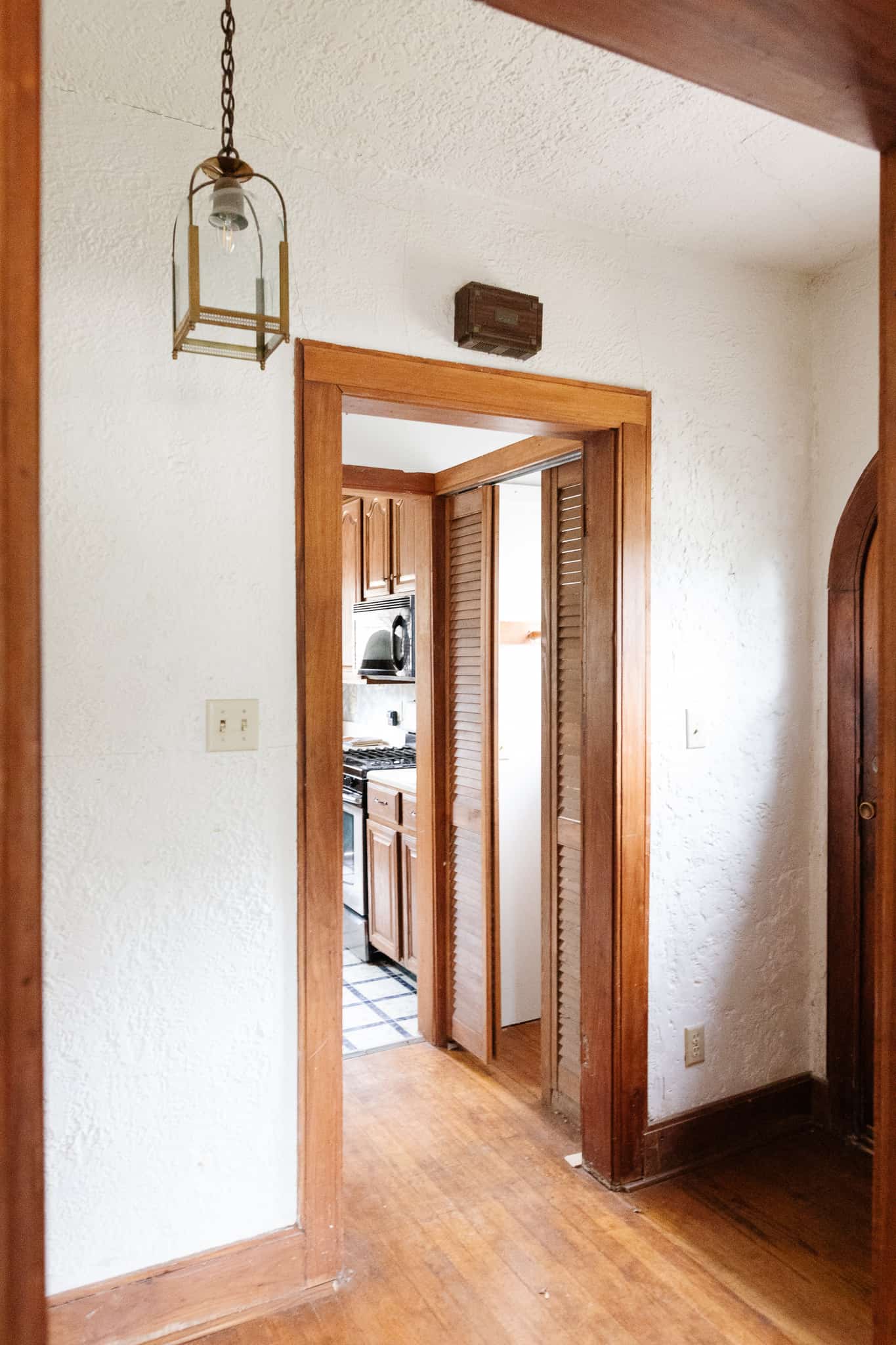 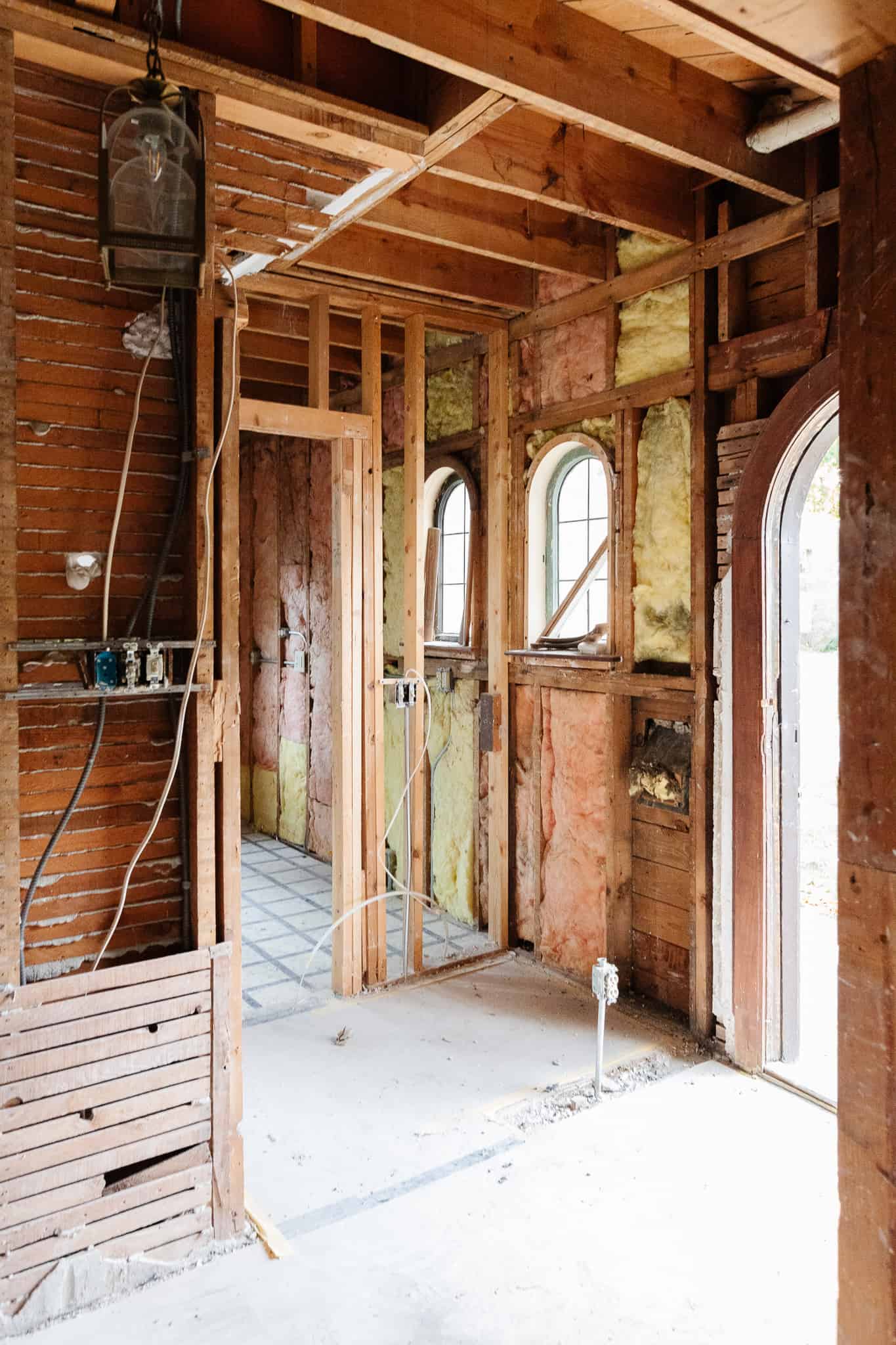 If you can believe it, this is the same view!! 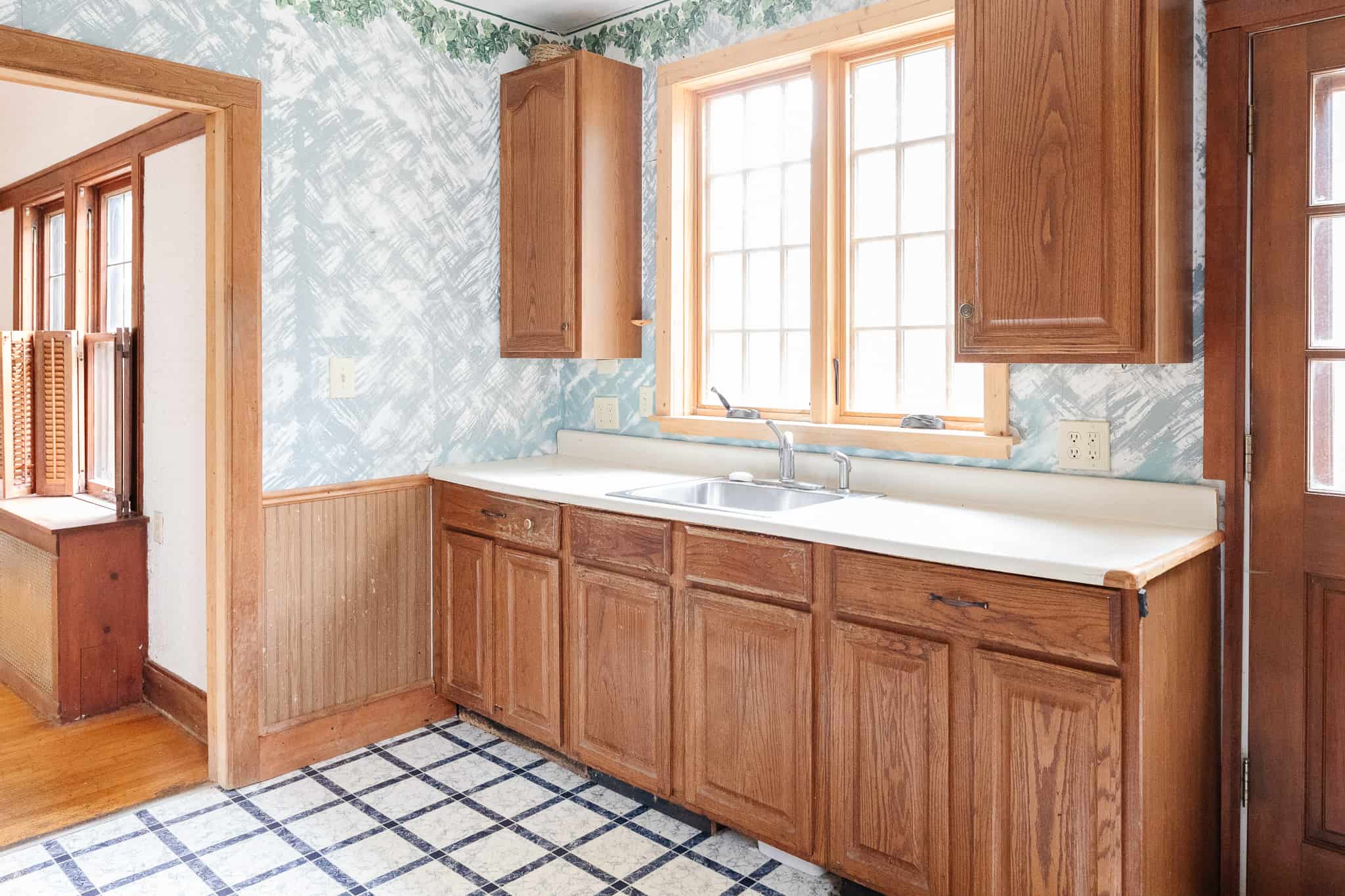 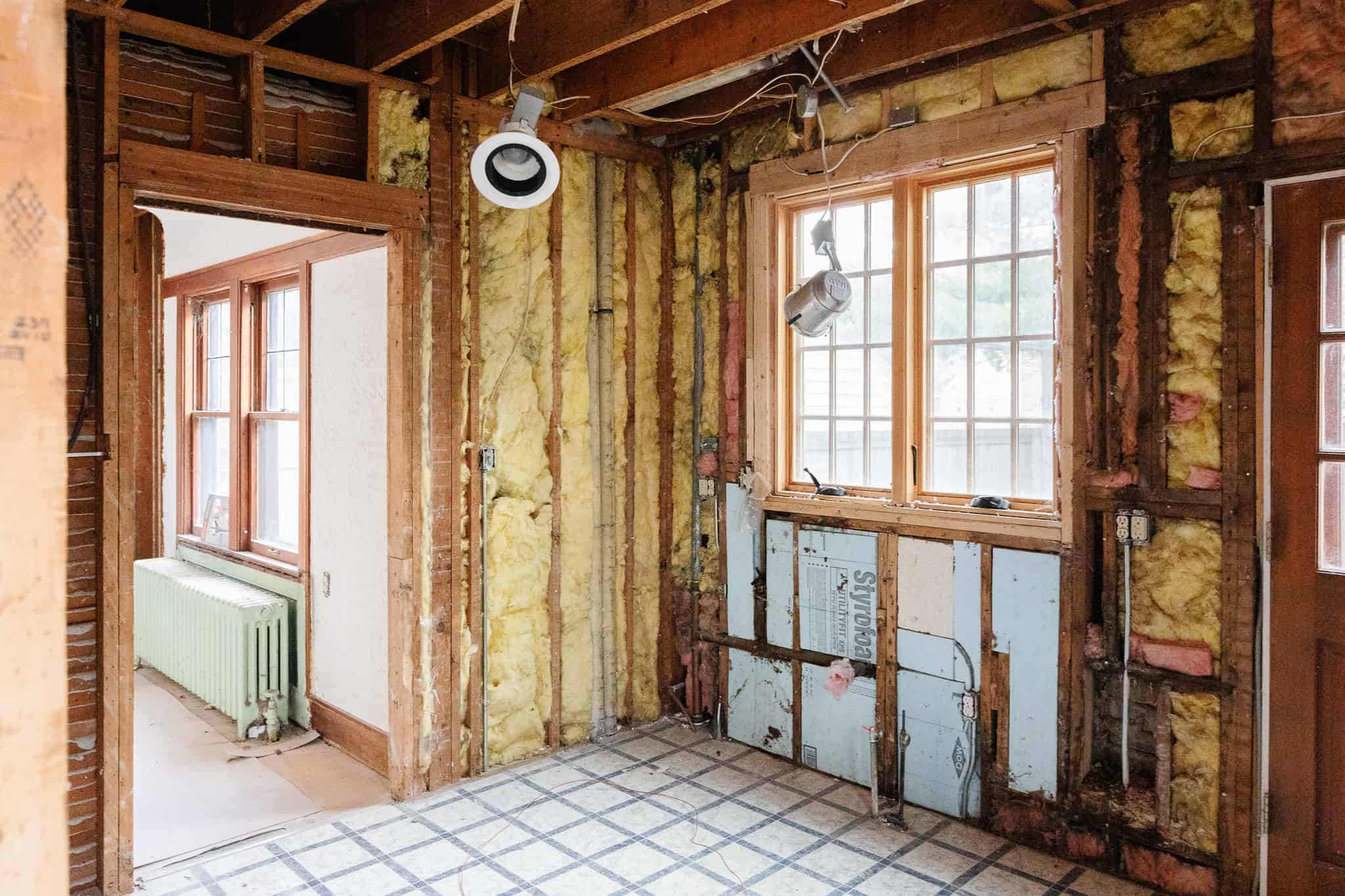 ^Same with this view! 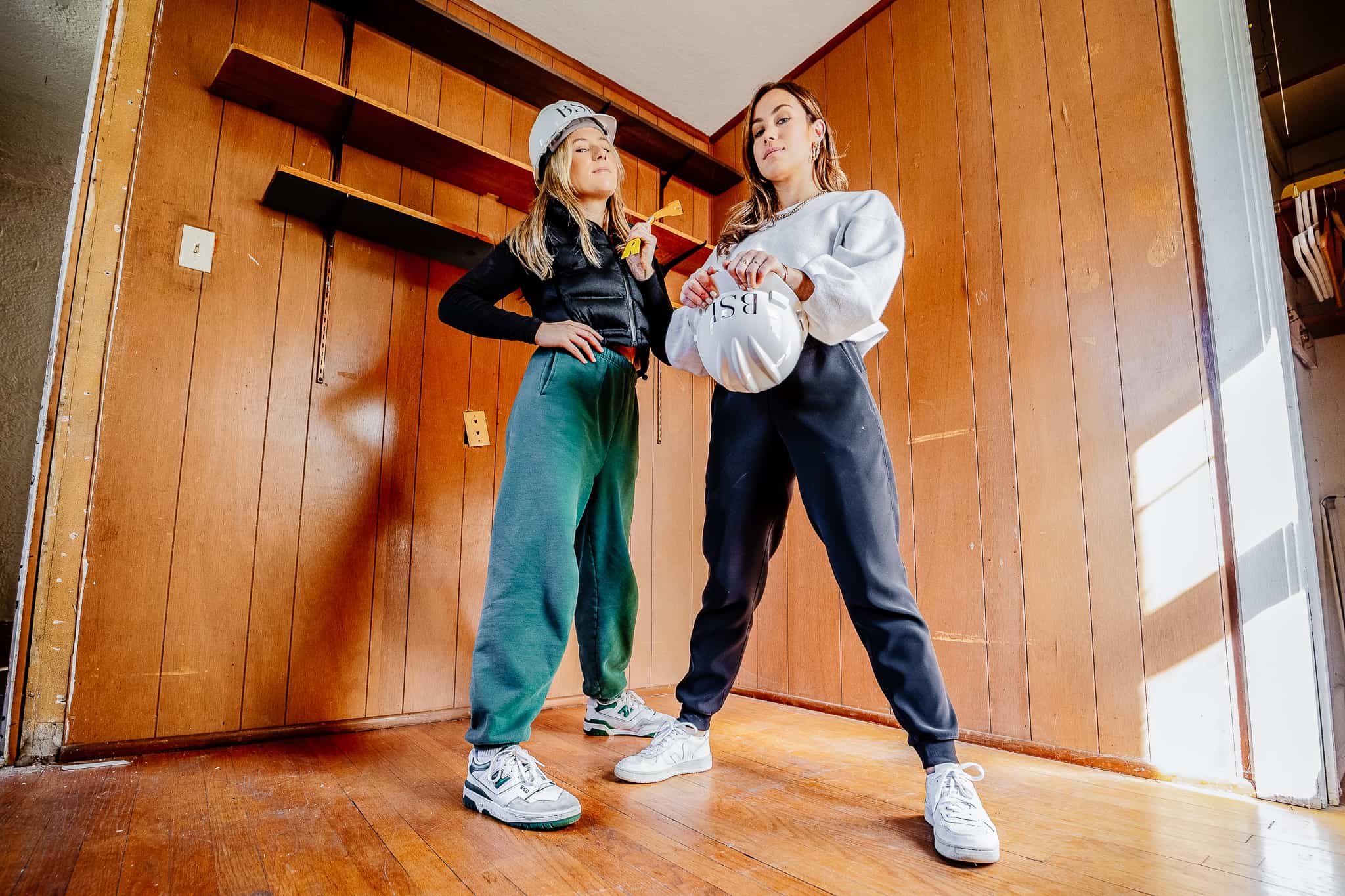 The day before construction started, Sarah and I demo'd the upstairs bedroom (literally the easiest demo of the entire project haha). Zach, one of the videographers on the production crew, filmed it and took this picture of us 😂😂😂. 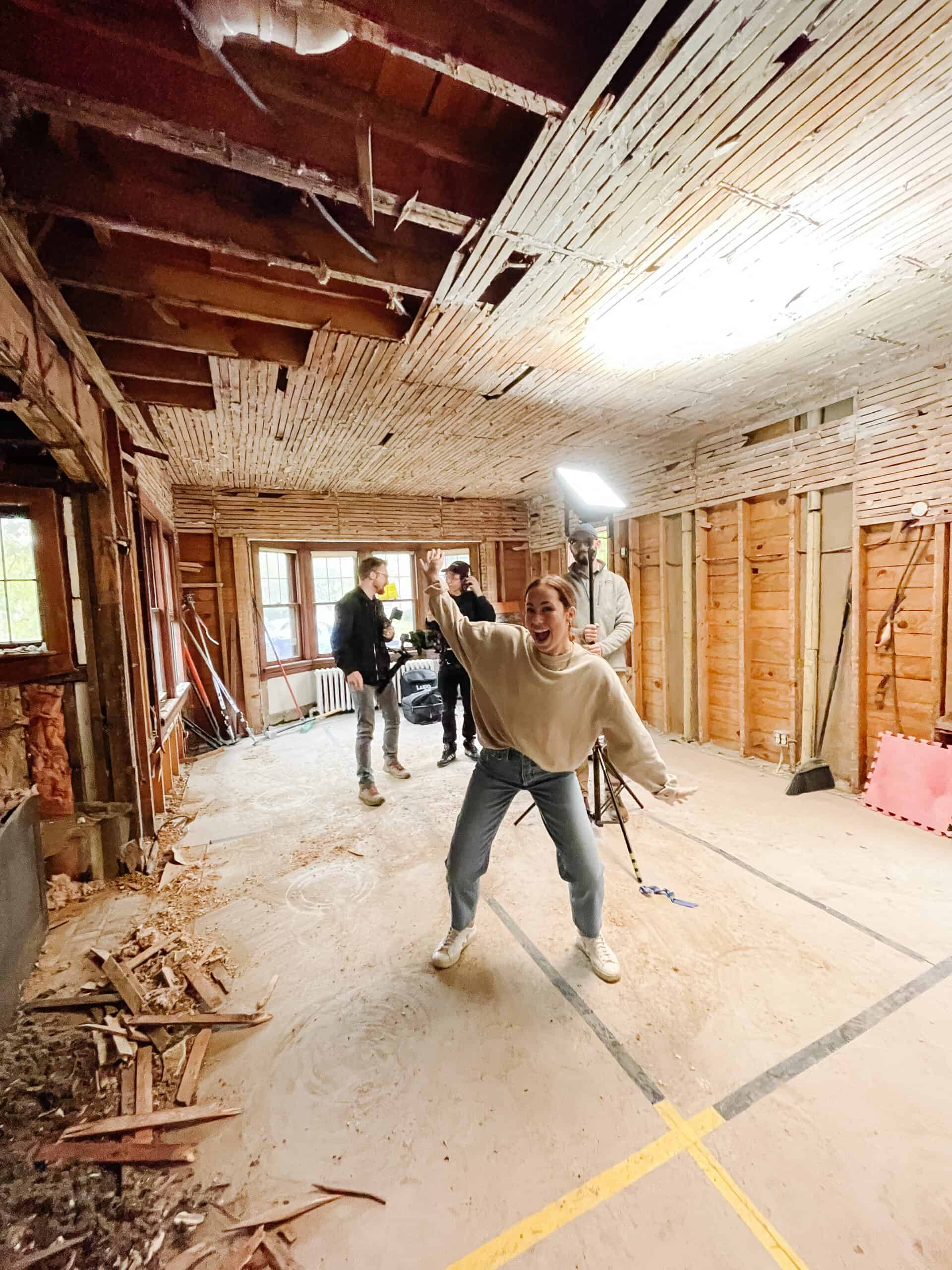 We've had so much fun filming with the production crew!!! They have the BEST energy. at first we were awk on camera but now we know them so well that it is so comfortable haha. They have been documenting everything...I can't wait to see the final films!!

And the biggest thing that's happened in the last few weeks... 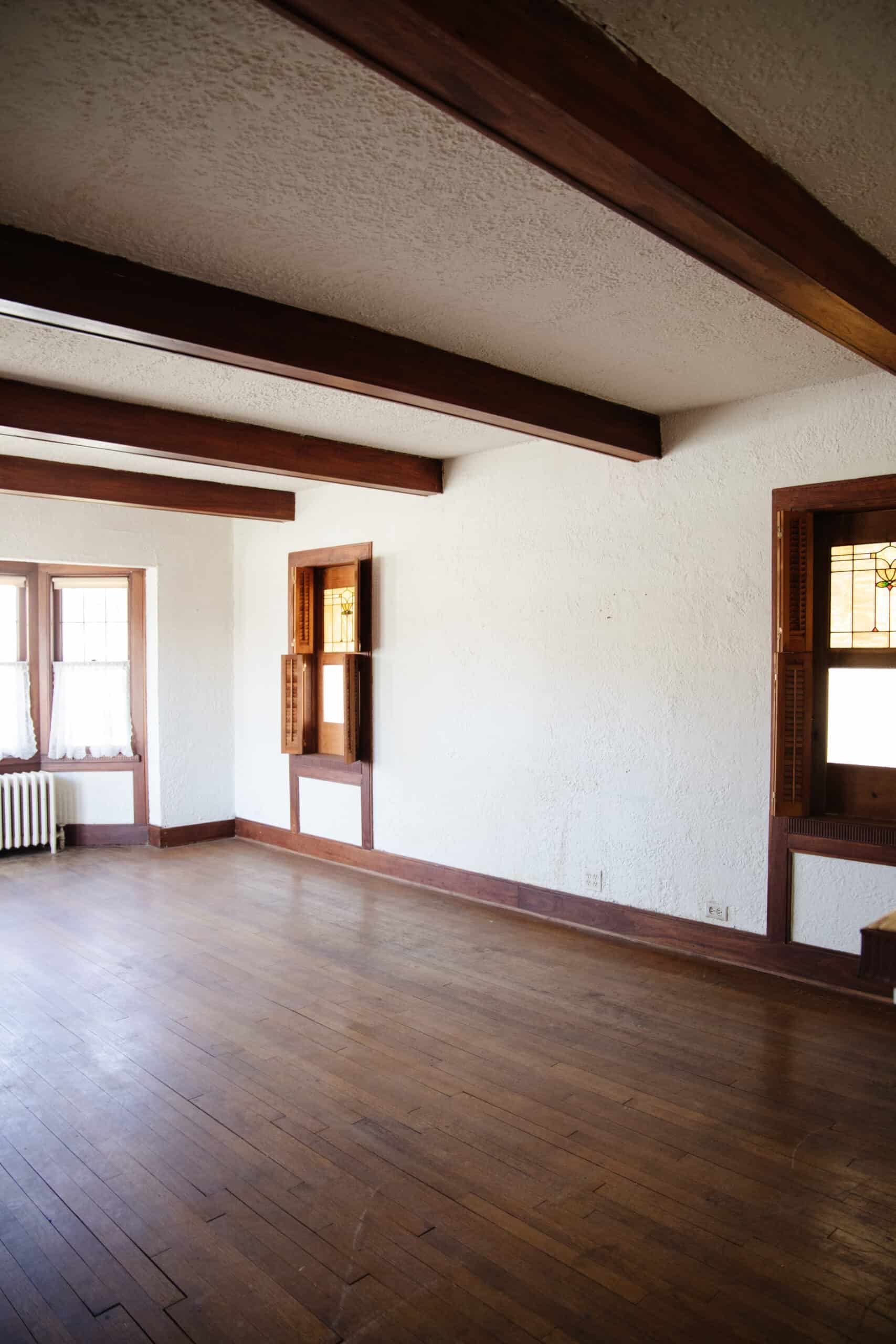 The wall was officially opened up to the addition. We're standing in the living room and behind us will be the kitchen and dining room. The windows are all boarded up to try to keep as much light in as possible but wait until you see all the windows opened up...it is the most beautiful, natural light I have ever seen!

That wraps up this GBOGH renovation update...In a few weeks is when the "pretty" stuff is going to start going in and I can't wait!! 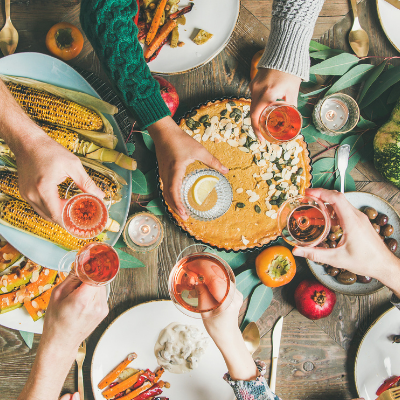 This post is all about cheap friendsgiving party ideas. Let's talk all things Friendsgiving. I love coming together with my friends and celebrating END_OF_DOCUMENT_TOKEN_TO_BE_REPLACED