Home » BSL Studios » A Breakdown of the GBOGH Primary Bedroom (and links to everything!)

We've had a pretty exciting few weeks over here. The GBOGH home got some really great publicity, and BSL Studios is now officially taking on design clients!

I learned SO much from the construction aspect to even how much material costs, I was able to show off my design style, and most importantly, I officially confirmed that this was, in fact, what I want to do with my life (which even though I have really always known this, at 25, you're always questioning, "Is this really what I should be doing" haha).

We accomplished all the goals we set for the GBOGH home, and I swear I love it like it was my own child. We only have two more reveals before you've seen every room in the house, crazy!

Today's reveal is the primary bedroom; this is in the large addition we put on the house, and even though it holds my biggest regret in the entire home (I'll get to that below), I really do love it. The bedroom is perfectly separated from the rest of the rooms (giving the owners just the right amount of privacy), and when you walk in, it feels like a retreat.

*PS - Every.single.thing that I ordered for this room is linked at the bottom of this post.* 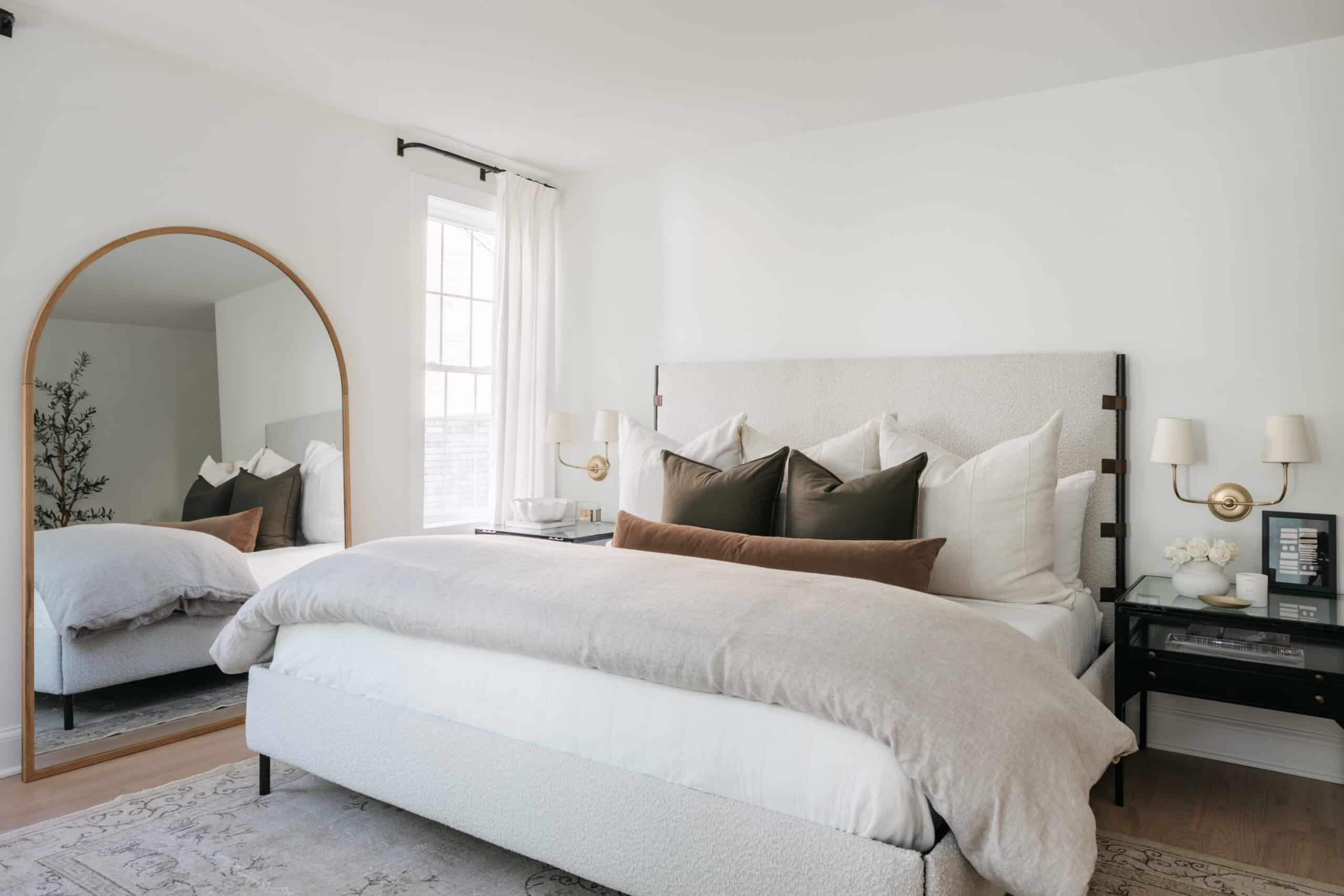 I'll get the two biggest reveal pictures out of the way, and then we can dissect the room and all the decor/finishes!

I am obsessed with the actual bed and bedding, so in a few weeks, we have a post planned to actually go over how I decide on all the layers of the bed and get that "hotel bed" look we all love.

Above is one side of the room, and then below, is the other side. 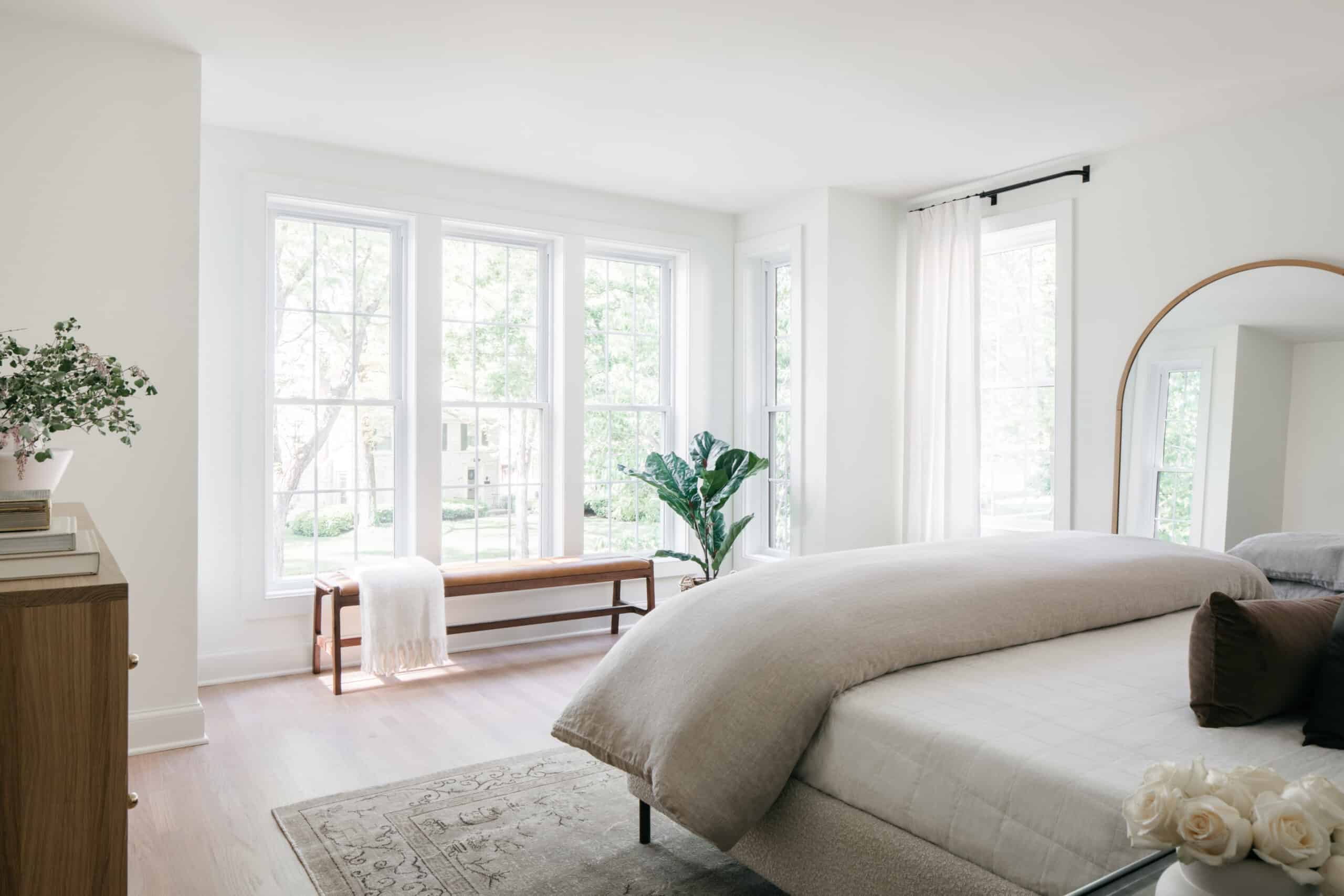 THE LIGHT. The amount of light that comes in through these windows is *chef's kiss*. Drapery can be really pricey, so I decided for the point of styling, to only put drapery on the right wall windows. If I was to personally live here, I would get some roman shades for that niche of windows.

This is one of the only rooms in the house that I really chose to do white on white... on white. I wanted this room to have a sense of calm when you walked in, and all the neutrals work to support that.

We used the same white throughout the home called Simply White by Benjamin Moore. 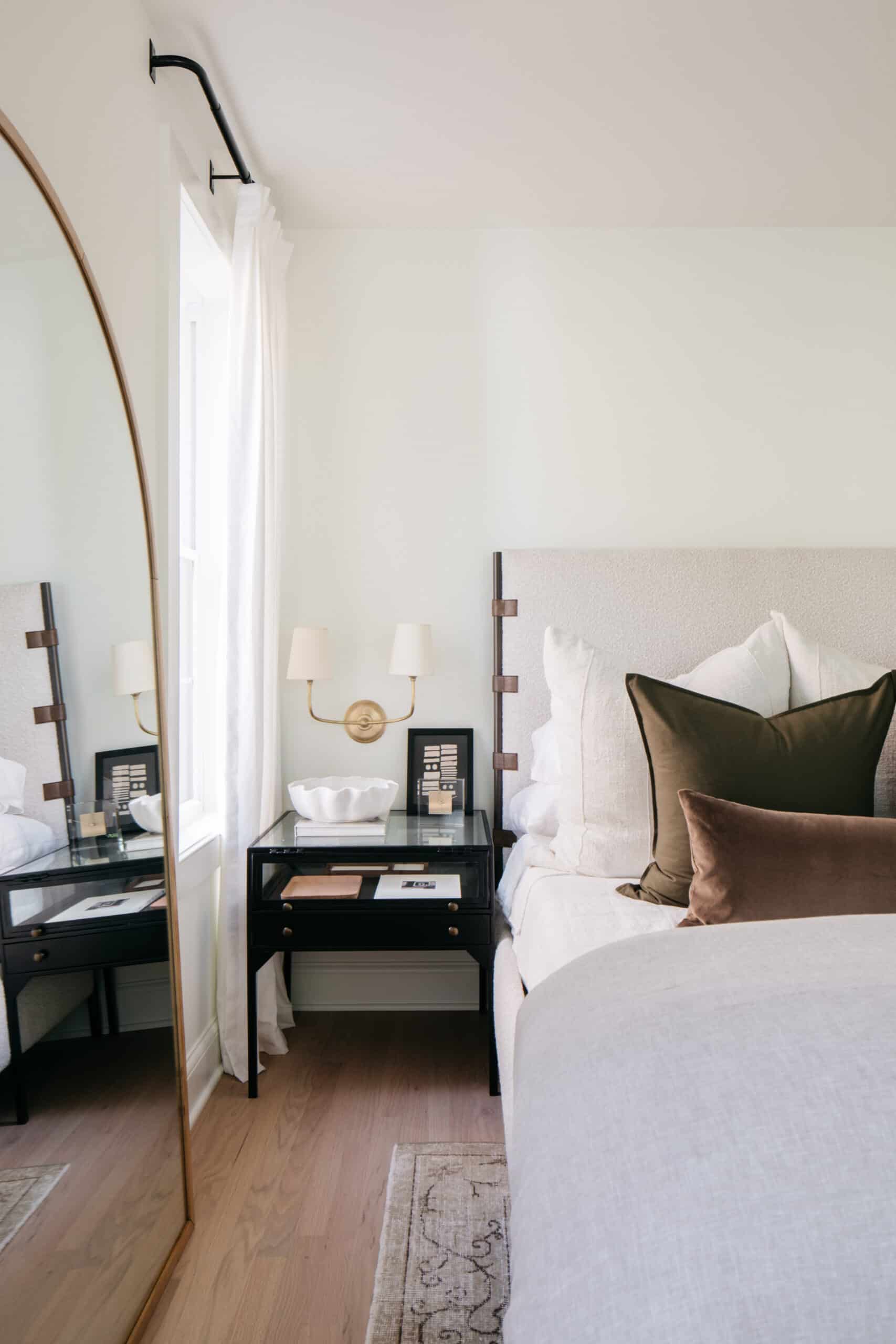 I feel like nightstands can be such a moment in a bedroom and are usually underrated. You can make such a decor statement with them!

I opted not to have traditional ceiling lights and to keep it simple with just canned lights (I know - shocking for me haha). I wanted to add a little spice with these wall sconces (bonus - we had the electricians wire the lighting, so there was a light switch on both sides of the bed; that way you can automatically turn off the lights and not to have leave the bed).

These nightstands are so beautiful. They're metal, substantial, and really make an emphasis in the room. I can actually almost guarantee that when someone walks in, they'll say something about the nightstands. In the future, I'll do an entire blog post on how I style nightstands, but to make sure this post is not insanely long, I'll keep it simple and link everything haha. 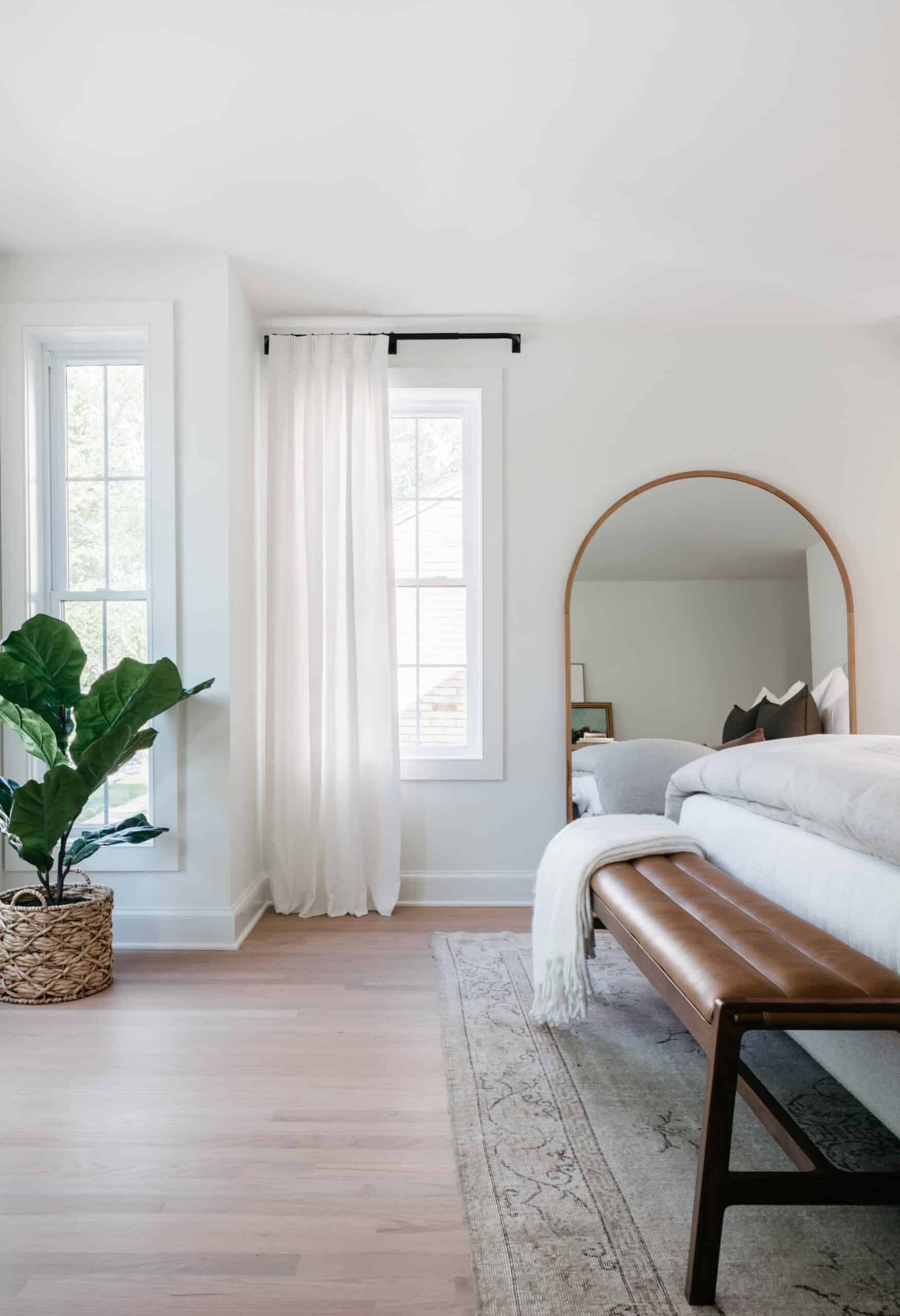 As I said above, I decided to use drapes on the wall windows; they're pretty slim and would have felt too overwhelming with anything else. I've loved this style of curtain rod lately, so I chose a round-edge curtain rod from Crate and Barrel.

Last minute I added this arched mirror (that I stole from my apartment), and I am so glad I did. The mirror really completes the room.

We recently brought the mirror back to my apartment, and it's insane how much bigger my apartment feels again. Mirrors are the hack to make any room feel larger. 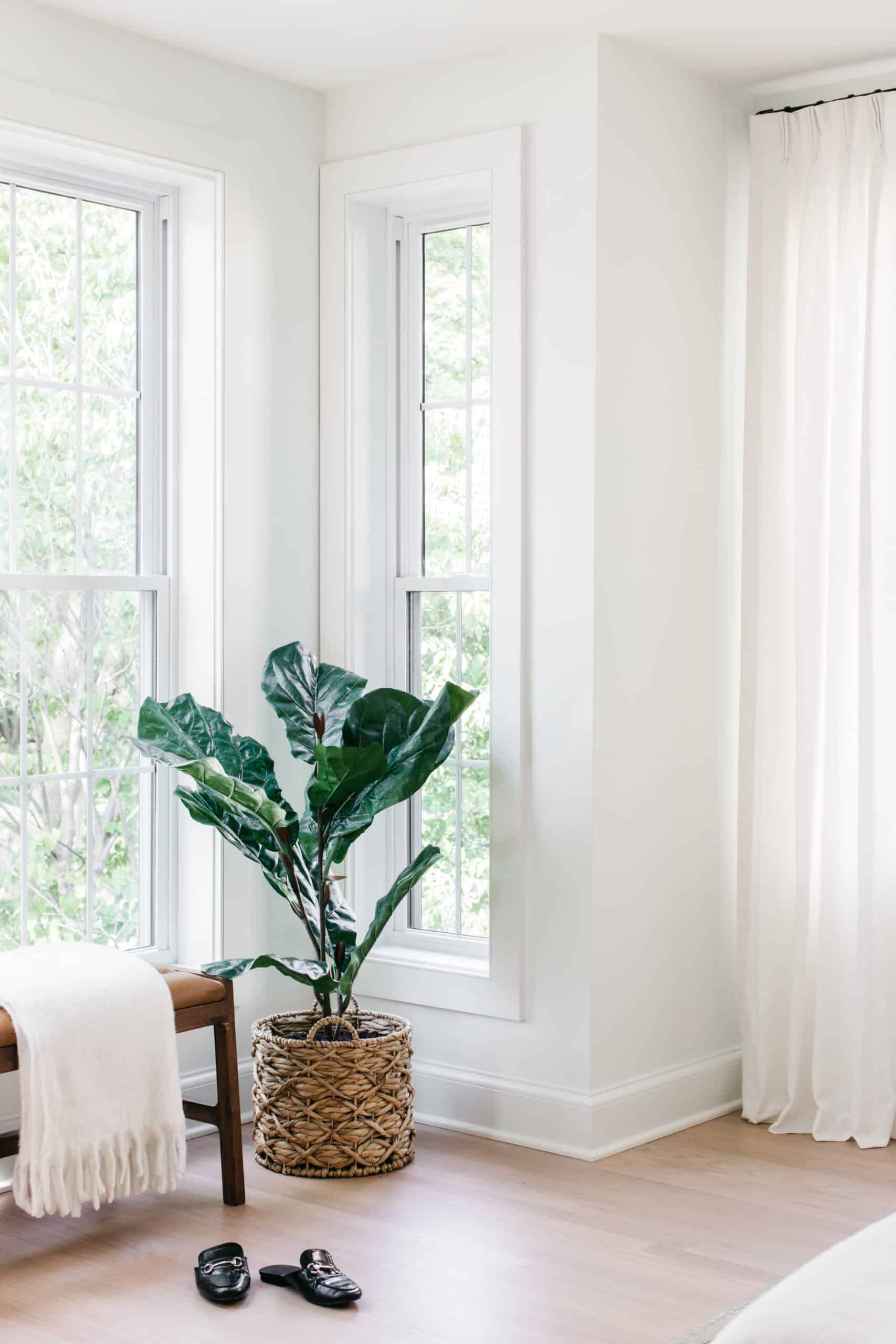 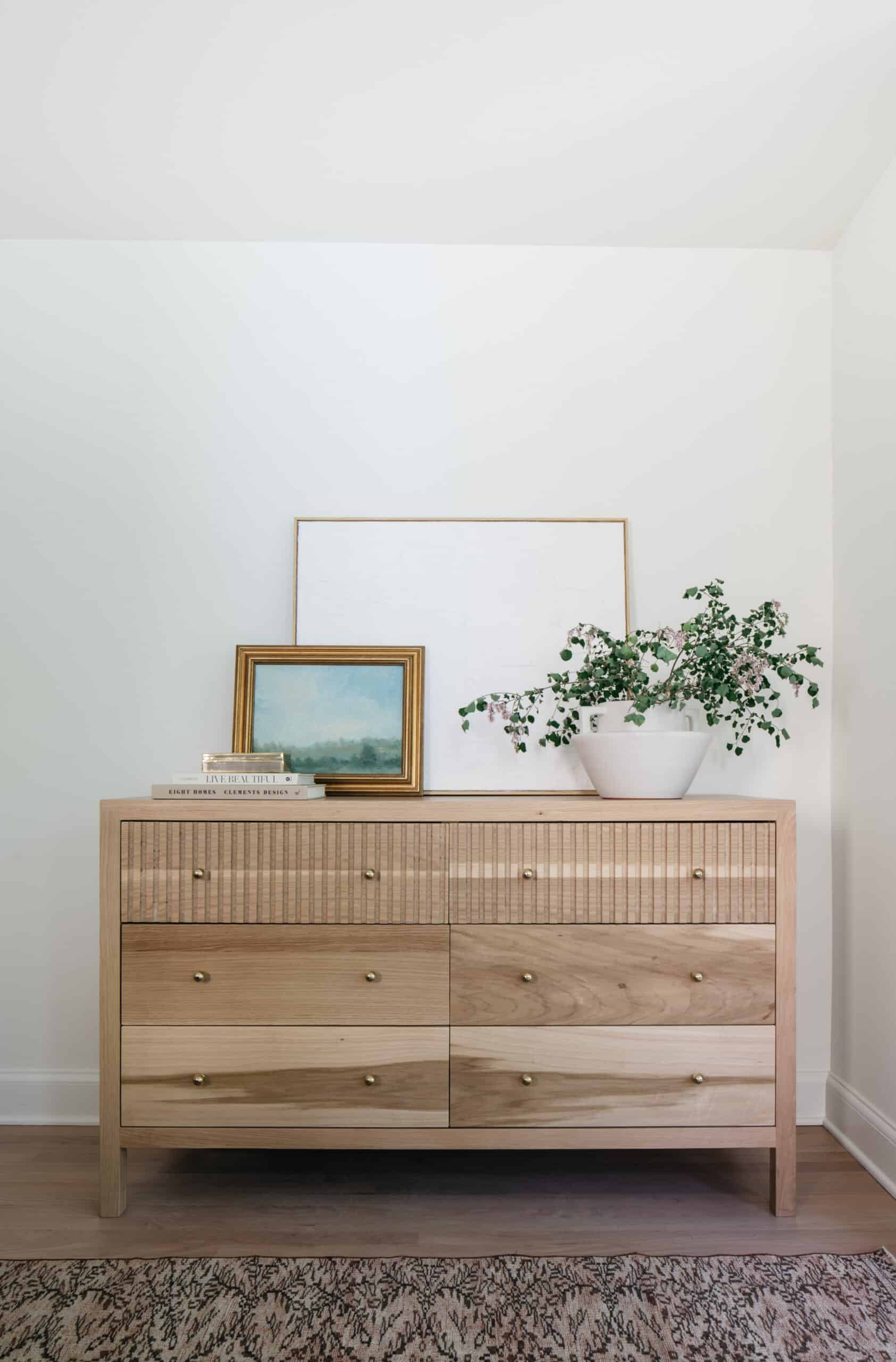 As I finished styling the primary bedroom, I could feel something was missing, so I quickly ran and grabbed this faux tree. It's the perfect height and makes a statement, without taking away from the bedroom as a whole. And, as someone who is extremely picky about plants, this one was perfect.

I personally designed the dresser in the primary bedroom with a local furniture company and am still obsessed. I'm a little (a lot) mad at myself for not having them build a few more dressers. I would love to create some for you to have as well!

The style of the dresser is different yet still classic at the same time. If it wasn't so damn heavy, I would have taken it home and kept it for myself. hah!

Lastly, you can see a peek at the artwork on top of the dresser...Sarah and Lauren painted that from a Goodwill painting! I love it so much. 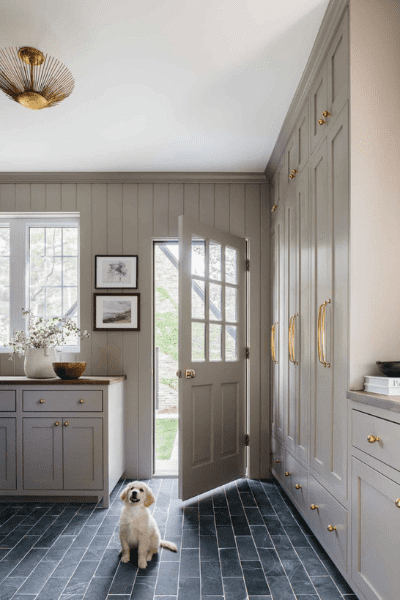 The Mudroom Reveal (Dare I Say, My Favorite Room In The House) 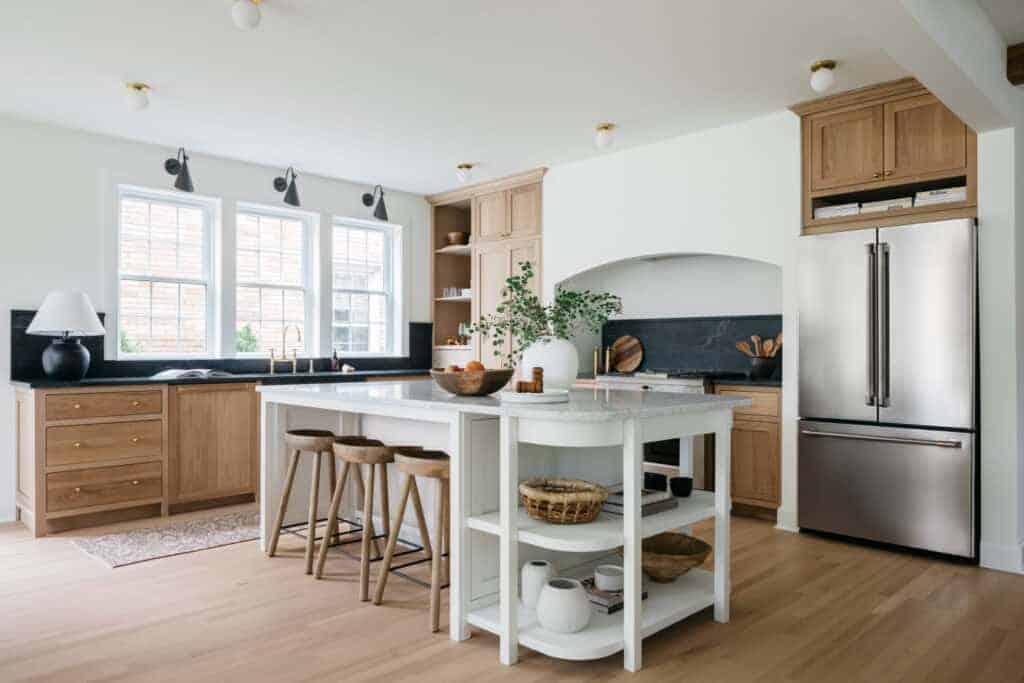 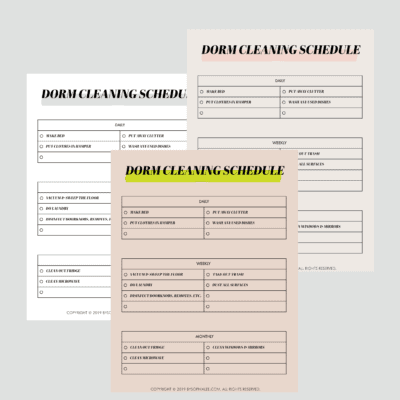 Looking for the best cleaning tips, products, and an amazing dorm cleaning checklist? We have everything you need!I know when I lived in a dorm freshman END_OF_DOCUMENT_TOKEN_TO_BE_REPLACED