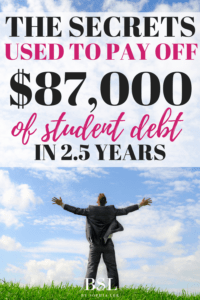 Sophia’s Quick Note: Today is the first of many student debt payoff interviews! I thought starting this series would be helpful for all my readers to show how it is possible to pay off your college debt quickly and learn how real people have completed it.

Kevin from Financial Panther is answering my questions about how he paid of $87,000 of student debt in 2.5 years. He has a great article on his website that goes into extreme detail of the numbers and method he paid off the debt with. You can check out his article HERE.

What did you major in and where? Do you believe your investment in your education has paid off?

I went to college at a large state school in the midwest, where I majored in history, economics, and legal studies. After graduating college, I took a year off, then went to law school where I accumulated $87,000 worth of student loans. I do think my investment paid off – I was able to get a good job out of law school and ended up paying off my student loans in 2.5 years. At a minimum, at least I earned enough to pay back what I borrowed.

When did you first start your journey of paying off your student loans and what was the first step in this process?

The first step in the process was to organize my student loans. It’s surprising, but when you’re taking out student loans during school, you never really look to see what loans you took out – money sort of just appears in your bank account. Once I had all of my student loans organized, I looked at my student loan interest rates, then went and tackled my highest interest student loans first. In other words, I went with the avalanche method of paying off my student loans since that made the most mathematical sense to me.

What type of loan did you take out? Variable or fixed? Did you consolidate your loans at the end? Would you choose a different type of loan if you did it today?

A few months later, I realized that, given how aggressive I was being towards my debt, I could actually go with a variable loan, since I figured that I could pay off my debt long before interest rates rose. I ended up refinancing them down to a 1.93% variable rate, which, by the time I paid off my debt, went up to around 2%. If you think you have a pretty secure job and are aiming to pay off your debt fast, then I think a variable rate loan makes sense, since you’ll pay less interest overall.

You paid off an incredible amount of loans in record time for your law degree. Did you have the same success paying off your undergraduate degree?

I was actually fortunate enough to pretty much have no undergrad loans. I only had to take about $5,000 worth of student loans for undergrad. However, I never did anything to pay them back quickly, so I actually ended up carrying that debt for 6 years before I finally paid it off. In retrospect, I probably should have just gathered some money together and paid off that debt right away.

You refinanced three times during this process. How did you know it was a good time to refinance and is there negatives associated with refinancing your student loans?

For me, refinancing made a lot of sense because I wasn’t going for any sort of loan forgiveness program and I had made the decision to aggressively pay off my debt as fast as I could. If you’re aiming to pay off your debt fast, then refinancing makes a lot of sense since you’ll lower your interest rate and be able to get much more of your money reducing your principle.

The only real negative to refinancing your student loans is that you lose access to a lot of loan forgiveness programs if you refinance them. So, if you’re thinking of refinancing, make sure you do the math to see whether paying it off quickly or going for some sort of loan forgiveness program makes sense. Personally, I prefer to just pay off debt quickly., but that’s not necessarily the optimal solution always.

You’ve mentioned on your blog that you wanted to keep a certain amount of money in savings while paying off your debt. How did you come up with that number?

For me, it was just about comfort. I’m a guy that likes to have backup options, so knowing that I had some cash to cover at least a month of bills made sense for me.

If you had to give advice to someone that is in college today, what would it be?

When it comes to college, I’m of the opinion that the school you go to matters much less than what you do there. The fact is, most people just don’t care that much about the college that you go to, especially since graduate degrees are such a big deal now. If you’ve got the drive and skills to make it, you’ll probably succeed no matter where you go to school.

I personally think the biggest mistake someone can make is coming out of college with a huge amount of student loans. Grad school is becoming more and more common, and if you have a huge student loan debt in college, you’ll make it so much harder for yourself. Grad school, you can make the argument that it makes sense to take out the student loans if it leads to a good career. But college, I think the goal should be to come out of there with as little debt as possible.

I can’t believe how much Kevin was able to pay off in such a short time! These debt payoff stories are so motivating for me and I love seeing that it is possible. 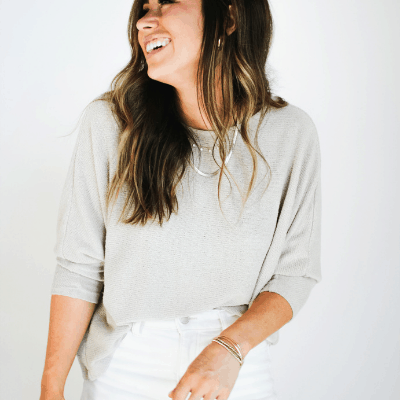 I am a sucker for dainty gold jewelry and when I find something I like, I basically wear it everyday for the next few years. One of my most asked questions END_OF_DOCUMENT_TOKEN_TO_BE_REPLACED